Walk along Pacific Boulevard to Carrall Street in Vancouver and you’ll see a garden growing in a concrete parking lot in the shadow of Rogers Arena. This is SOLEfood Urban Farm’s newest (and, at two acres, biggest) project – a sure sign that urban agriculture has reached Vancouver.

SOLEfood, which received a free three-year lease on the land from Concord Pacific Developments, has been growing bok choy, spinach, eggplant, kale, peppers, tomatoes, strawberries and other fruits and veggies in nearly 3,000 wooden planters since last May.

Once harvested, 10% of the produce will be donated to Downtown Eastside (DTES) organizations; the rest will be sold to restaurants and farmer’s markets and divided among members of SOLEfood’s community supported agriculture (CSA) program (find out how you can receive fresh, locally grown produce throughout the year here).

But SOLEfood grows more than food. It also creates jobs for people that may have trouble finding employment. With several more urban gardens in the works, the organization, which was founded by Michael Ableman and Seann Dory, plans to employ up to 25 Vancouver Downtown Eastside residents to build planters and care for the plants by the end of 2012. 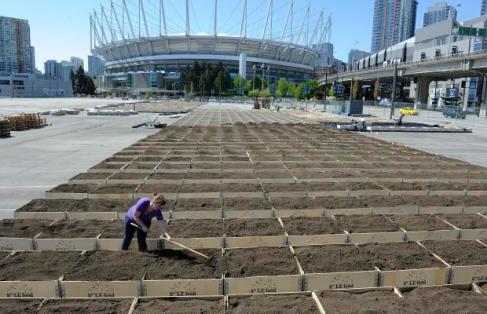 Reblogged this on Other Such Luck?.

Its such as you learn my mind! You seem to grasp so much approximately this, like you wrote the book in it or something.
I feel that you can do with a few p.c. to drive the message home a little bit,
however instead of that, this is excellent blog.
An excellent read. I will certainly be back.

If you suffer from regular breakouts, you should increase how many times you cleanse your face each day.
, the official medical journal of the American Society of Plastic Surgeons (ASPS).
The above are just some of the most important skin care tips and best acne treatments to keep in mind if you have acne.